Step by step, the jacket is getting closer to being completed. With the body of the coat completed, it was time to add the collar and the sleeves. After that, the shell of the jacket was done! 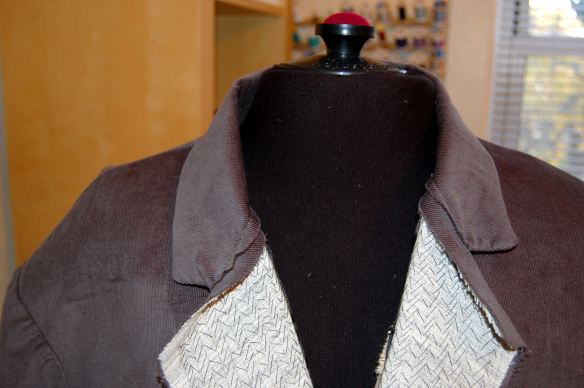 I didn’t follow the directions for attaching the collar, which means I had to do it twice. The original directions are for a traditional men’s jacket collar, which has a felt under collar. It’s a lot more work and more hand sewing, and it doesn’t fit the casual style of this jacket. Once I figured this out, I had to re-cut the collar and start over. First, I steamed the under collar along the roll line instead of padstitching it. Then I sewed the upper and under collars together and attached them along the neckline. And that was that. 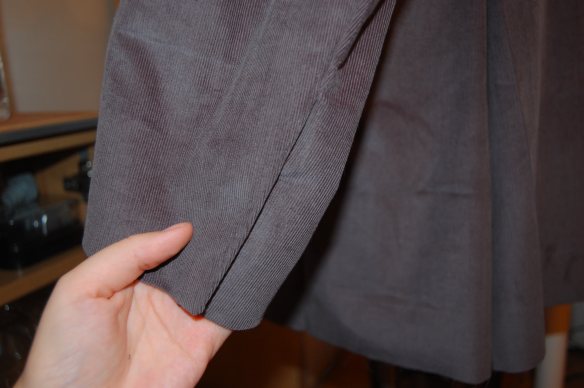 The next step was the sleeves. This was an unusually complicated process because of the vents. It was my first time attempting this style of sleeve. First, I had to interface the edge, turn up the hem and miter the corners of the vent. Then, I had to hand sew the hem and the vent closed. It doesn’t sound complicated in words, but the instructions didn’t include great drawings to help me make sense of it all. I got it done though, and I think they look fantastic. 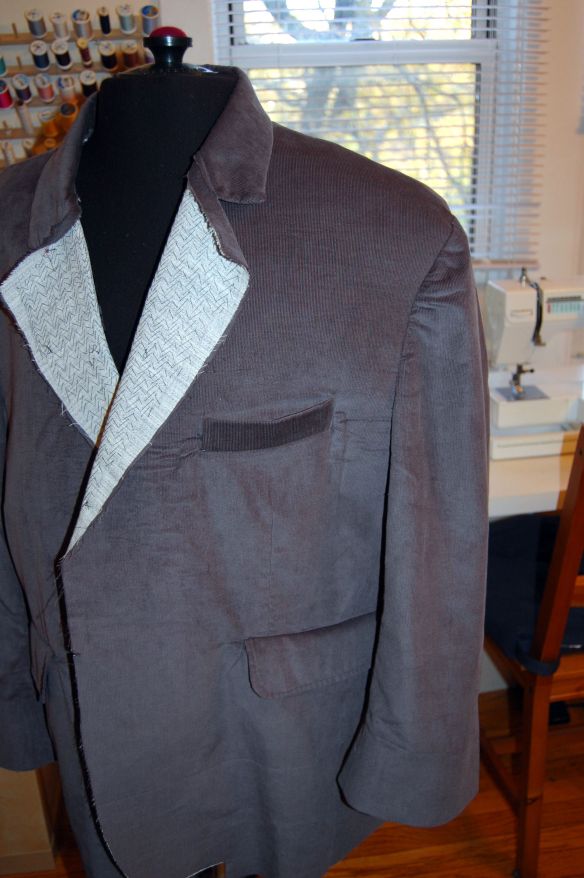 Finally, the sleeves were sewn to the jacket body. They look a little puckered in the photo because I haven’t put shoulder pads in yet. After the sleeves were in, Peter put on the jacket right away to check the fit. The fit is great and we’re both getting very excited to see the finished jacket. Next, I’ll be working on the lining. Stick around–it won’t be much longer until it’s done!

Part 5 of the Labor of Love Jacket was some tailoring–my first foray into this realm of the sewing world. I did my research and patiently padstitched the lapels one Saturday afternoon while watching the Fighting Irish lose a football game. After all the padstitching, I steamed them along the roll line and let them dry overnight on a damp towel. 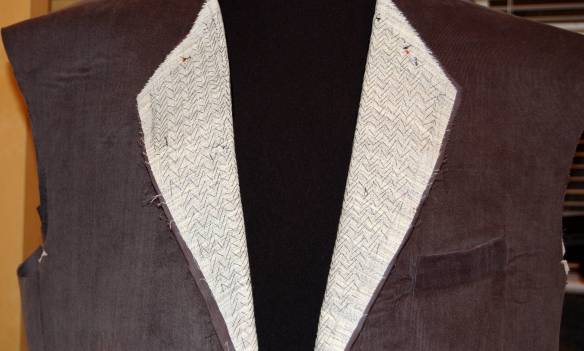 I have to say, I’m not really sold on whether the padstitching had any positive effect on the shaping of the lapels. I don’t doubt that the technique works, but I don’t think that it’s useful for such a thin corduroy because it was nearly impossible to keep the stitches invisible from the right side and actually grab enough fabric on the needle. I think more than half of the stitches only made it through the interfacing layer. What did work extremely well was steaming the lapels and letting them rest in place overnight. 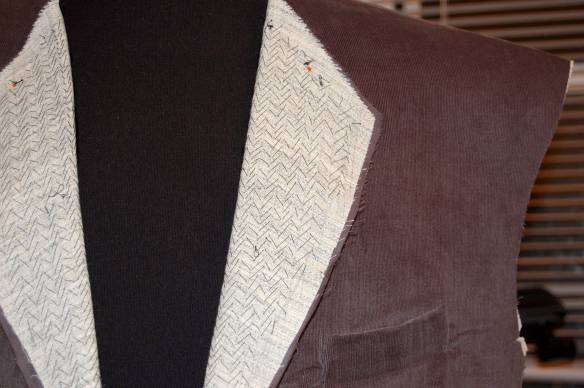 Stay tuned for more news about the progress of the Labor of Love Jacket. In the meantime, I’d love to know about any experience you’ve had with tailoring and how it worked out.

Don’t worry, I’m still here. I had to take a bit of a break from blogging because I just have had a rather busy October so far. When I’ve had some sewing time, I’ve devoted it to working on the jacket instead of writing about it. Now that things are slowing up just a bit, I should have more time to sew and to write about what I’m sewing. Hooray! 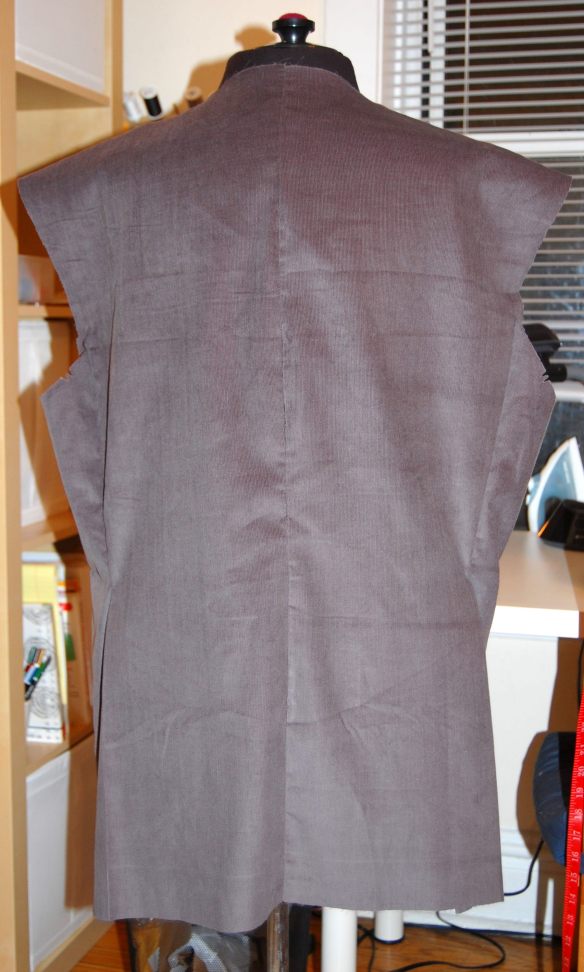 My latest progress to report was actually a fairly simple part of the process in comparison to rest of what I’ve done. I simply had to assemble the back of the jacket and attach it to the front and sides. The only part that took a bit of work was the back vents. I changed the pattern from having one vent at the center back to having two vents, one on each side of the back. It wasn’t difficult. It was simply a matter of doing the same steps twice instead of once. I think it looks pretty nice too. 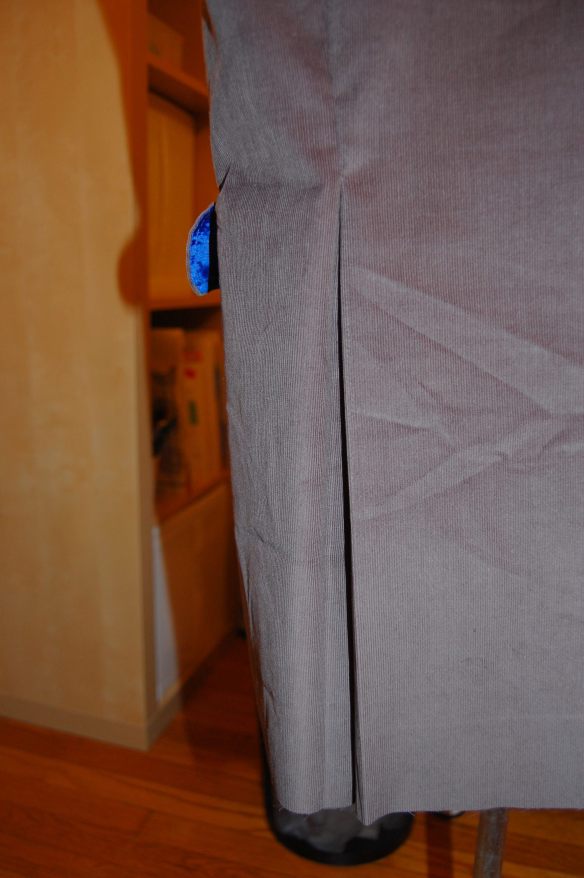 I know that isn’t much to tell about, but it seems significant because the fabric is starting to take the shape of a jacket. It’s becoming three dimensional. I’ll have much more to tell soon about my adventures in tailoring!

I can’t believe it’s been almost a whole month since I posted any progress on the labor of love jacket. It’s a little embarrassing! After a summer full of projects, the beginning of the fall has not been nearly as productive. The good news is that I have completed some of the most intricate work. 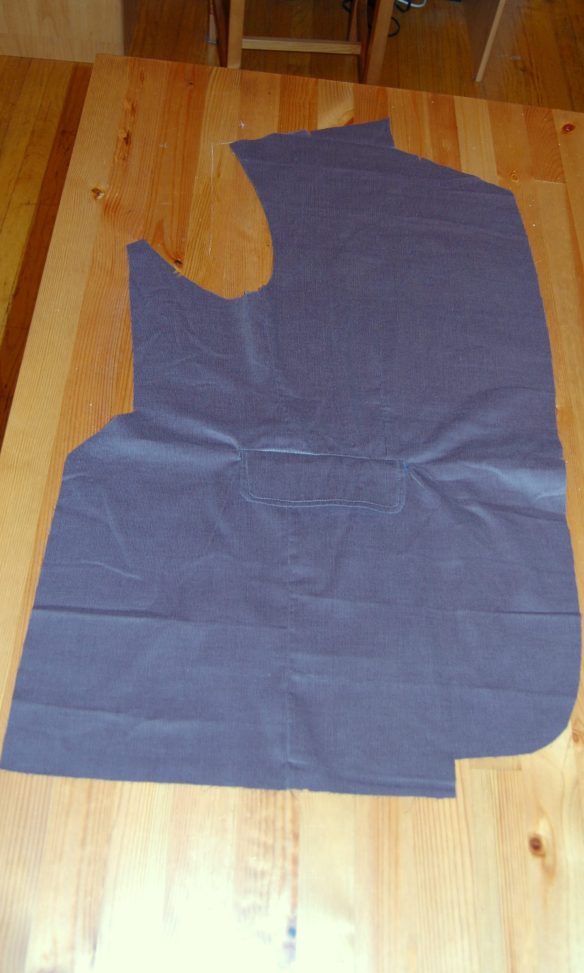 The front of the jacket is completed! This included putting darts in the front, joining the front with the side panels (didn’t know this, but men’s jacket’s often don’t have a side seam), and sewing three welt pockets. The welt pockets required a lot of work and patience, but I think they went in pretty well. Here’s a little peak inside one: 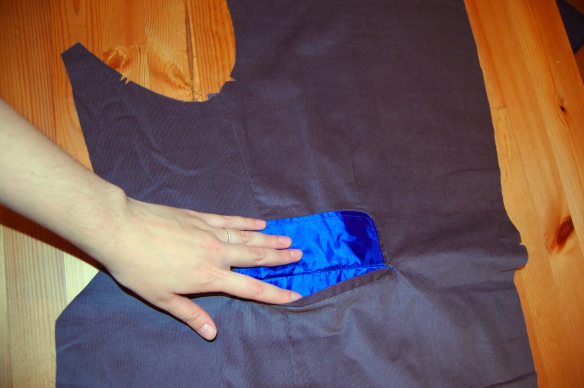 Under the flaps and inside the pockets are lined in royal blue. I think it looks pretty sharp, but I also wanted to be sure that the blue didn’t peak out at the edges of the flap. To ensure this, I trimmed 1/8 inch from the edges of the lining only. When I sewed the outer flap to the lining and then turned it, the outer flap was just a smidge wider. When the flap was pressed, the gray corduroy rolled to the inside a bit, which hides the lining fabric from view. 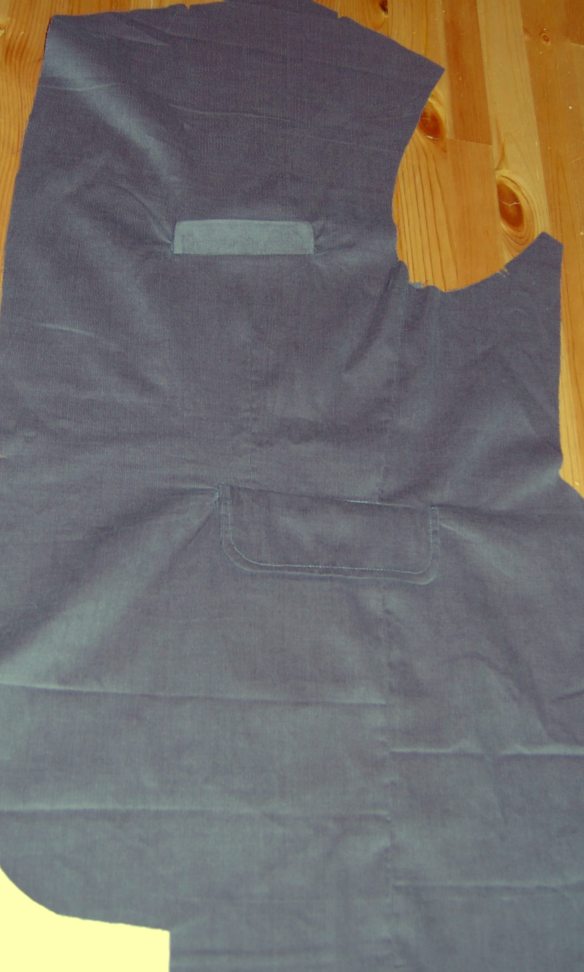 Here’s a nice view of the lower flap pocket and the upper welt pocket. You can also see the nap of the corduroy here. All of the main pieces and the pocket flaps were cut with the fabric going one direction, but the welt of the upper pocket was cut in the opposite direction. You can see the difference because of the light of the flash, but it’s not really visible in person.

I know there’s a lot of work ahead of me, but I feel like I’ve crossed a milestone in this process. I can begin to see what the final jacket is going to look like. Peter is very anxiously looking forward to it being completed and I am too. 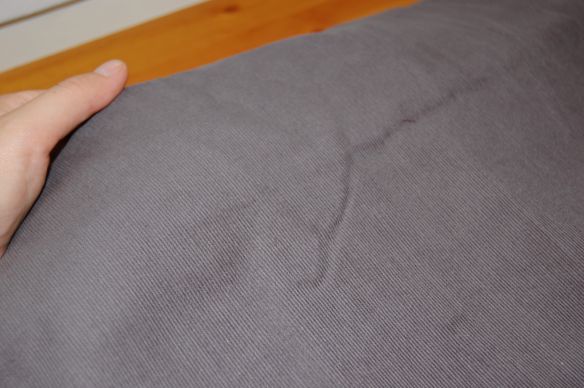 Fabric for the “Labor of Love Jacket” has arrived! The chosen fabric is a gray corduroy. As you can see, the wales are very narrow and the color is a medium gray (technically named “graphite). It should be pretty easy to work with since it’s cotton and it’s not too heavy. 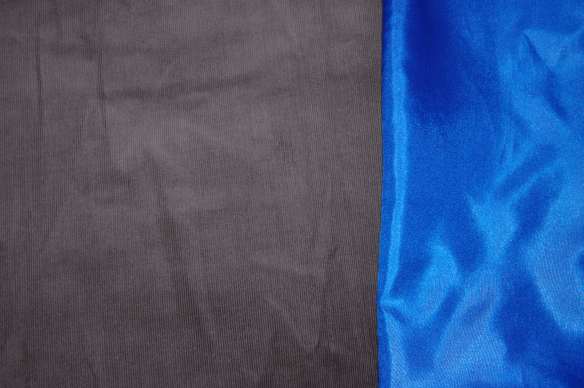 The lining is a polyester china “silk” in royal blue. It’ll provide a bright contrast to the gray corduroy. I can’t wait to get started on this project, even though cutting is my least favorite part of the sewing process. Unfortunately, it may be a week or so before everything is cut out because I go back to school this week and will be busier during the day. I’m glad I have such a challenging and exciting project to come home to though.

I’m making more progress on the jacket for my husband. I have the muslin fitted. I fitted it bit by bit. First, I constructed the front and back of the jacket and checked that it fit in the circumference and length. Next, I constructed the sleeves and did the same. Finally, I adjusted the collar and lapels to get the look he wanted. Here is a peak at what this looked like. 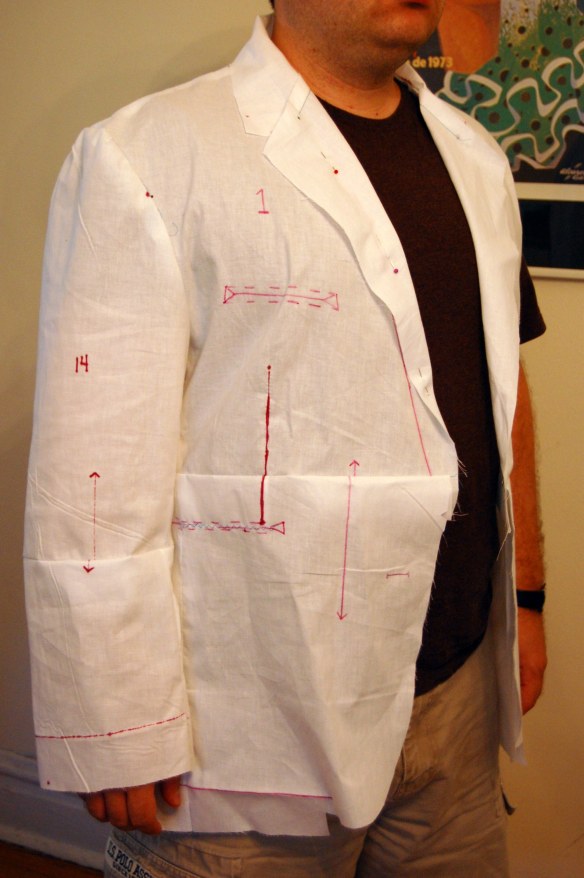 In this picture you can see how I pinned the collar and lapel for a narrower, leaner look. The originally marked roll line can be seen in pink Sharpie. You can also see the tuck I took horizontally above the waist to shorten the jacket. My husband is shorter than your average bear, so shortening the jacket was the most important alteration to make. The proportions of ready-to-wear jackets and patterns make my husband look shorter than he is. Fixing the length will make him look correctly proportioned when he’s wearing his new jacket. 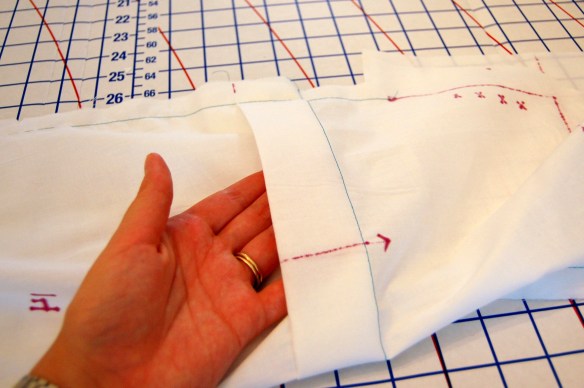 A shorter torso also means he has shorter arms. I took another horizontal tuck between the elbow and the hem of the sleeves. You can see a little bit better here how I did it. I folded and pressed along the lengthen/shorten line given on the pattern. Next, I sewed a seam half the amount I wanted to shorten the sleeve by. I will use this tuck as a reference when I fix the pattern. 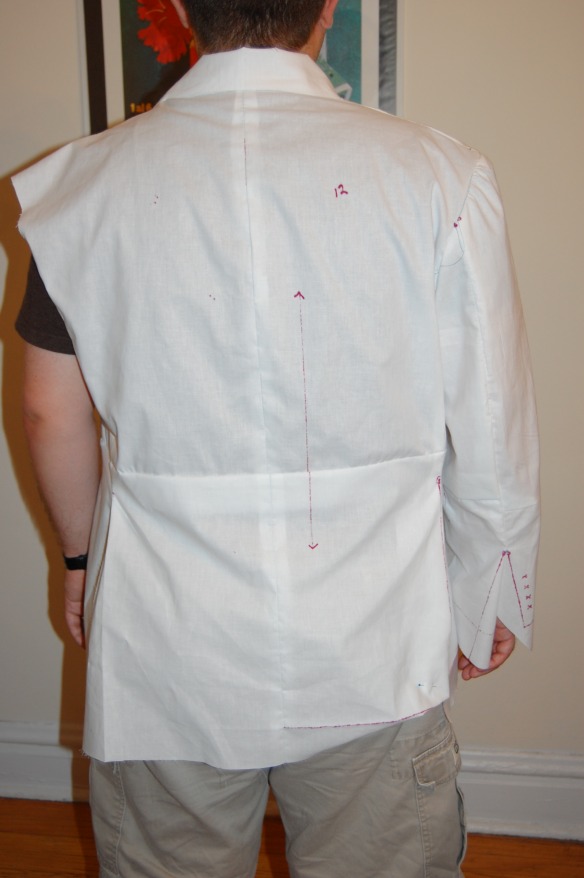 Here’s a view of the back. I think it looks pretty good. My husband specified from the beginning that he didn’t want a center back vent. He wanted two side-back vents. I had to change the pattern to reflect this wish. It was pretty easy to do. I just cut the extension for the center back vent off and moved it to the side back seam. I think this was a good design change. The horizontal lines along the back are less interrupted, which fits with the sleek look we’re trying to achieve. The next step will be to transfer all of these changes to the pattern and decide on fabrics to use.

The “Labor of Love Jacket” is in motion! I’m excited and just a little bit terrified. This stage is going to help me gain some confidence though. I am playing it safe and making a detailed muslin since it’s my first time sewing men’s clothing and my first time making a tailored garment. I’m crossing my fingers that this stage will be relatively pain-free and get me started on the right foot. Take a look at what I’ve accomplished so far. 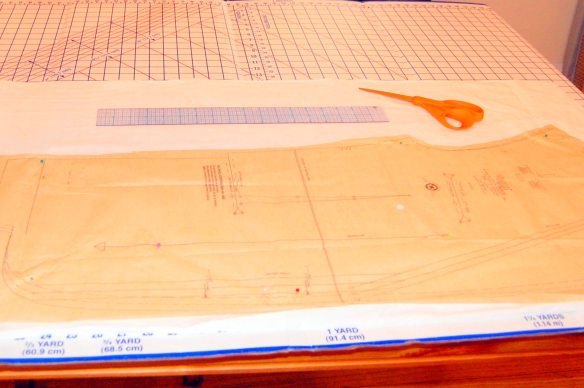 First, I cut out the pattern pieces from the tissue paper and sorted out which ones I would need for the muslin (only 6 out of 27!). Then, I pinned them to the muslin fabric and cut out the correct size. I decided to go this route, rather than the more time consuming route of tracing the seam lines in and cutting more generous seam allowances, as suggested by Susan Khalje in Threads Magazine, Oct/Nov 2010. If I thought I would have to make some major alterations to the lines of the pattern, I would have done it that way.

After cutting, I traced over all of the important pattern markings (dots, grainline, darts, hem, etc.) with a Sharpie marker. Using a Sharpie marker saves me a bit of time because the ink bleeds through the tissue paper and leaves a visible, permanent mark on the muslin. If you press hard enough, it’ll even mark through both layers. (Note: I would never use this method to mark my fashion fabric because many of the markings would end of being permanently visible on the finished garment.) 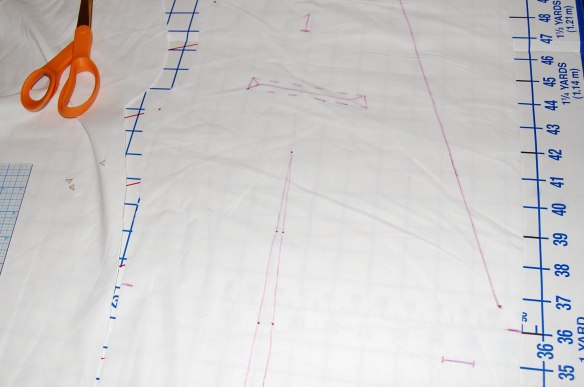 Here’s what the muslin looked like after I lifted the tissue pattern off. You can see all the markings in pink Sharpie. There were a few that came out a little bit light and I just traced over them to be sure I wouldn’t miss them later. Next up, I’ll baste the muslin together and check the fit.